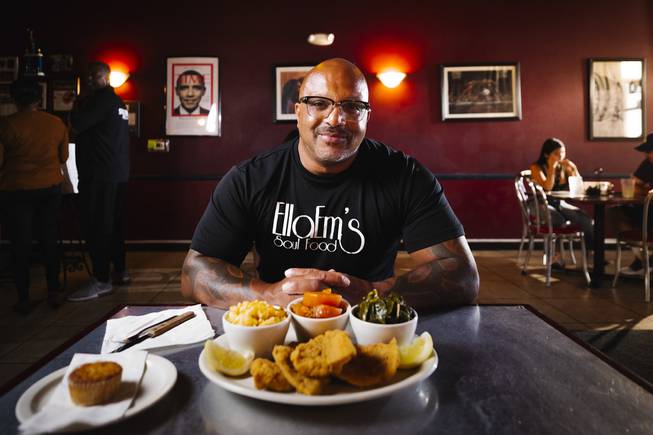 The night of June 6 at Ella Em’s Soul Food represented the new normal for the North Las Vegas restaurant. Seating was limited to meet social distancing guidelines, but close to two dozen people dined on wings and waffles, catfish and fried chicken, seemingly unfazed by the risk of the coronavirus.

To-go orders were lined up behind the front counter in plastic bags, and third-party delivery drivers hurried in and out. A sign instructed customers to wait outside after placing takeout orders.

“When the virus first hit, it affected us substantially,” said Pierre X, who owns the eatery with his wife, Aem Upachak.

The state ordered all nonessential businesses closed in mid-March to curb the spread of the virus. Restaurants were limited to carry-out service only and were not allowed to reopen their dining rooms until May 9. By then, some had already shut down for good.

“We just said this is our bread and butter and we had to keep it going,” he said. “We reinvented ourselves. Part of that was introducing the eatery apps like Grubhub and DoorDash. That helped us because it got us a lot of new business.”

Some small businesses in Las Vegas — including Ella Em’s — have been able to adapt and survive the crisis. Others haven’t been as fortunate.

Pierre X said a couple competing soul food restaurants “couldn’t withstand the storm” and went out of business. “This year has been something else,” he said.

Black business owners have been hit especially hard by the pandemic, said Frank Hawkins, co-owner of the Nevada Wellness Center marijuana dispensary and a former president of the Las Vegas chapter of the NAACP.

“When white America gets a cold, black America gets pneumonia,” Hawkins said. “A lot of our African-American businesses are service businesses. Some businesses have been able to be resistant, but if you have a support business or a barbershop or beauty shop, they had to close.”

David Washington, one of the founders of the Black Business Council of Nevada and a former Las Vegas fire chief, said it’s no secret that a significant number of minority-owned small businesses will not recover from the coronavirus downturn.

“It’s heartbreaking,” he said. “We are working on some things, though, and one big thing is to help some of these black businesses in our community get access to capital. Otherwise, some won’t come back at all.”

Sparked by the killing of a black man in police custody last month in Minnesota, protests advocating for social change have emerged in recent weeks in nearly all major U.S. cities. The national outcry — the likes of which hasn’t been seen since the 1960s — could, some say, affect not just changes in police practices but a wider array of social justice issues.

Brian Harris, president of the council, said the issue of access to capital for minorities is something that needs to change. It’s the reason the council was formed almost three decades ago.

“That’s the main problem in the black business community,” Harris said. “We haven’t been able to get loans. You can never have social justice without economic opportunities. If a group doesn’t have the same opportunities — not just for jobs, but for business opportunities — then you get what you’re getting now.”

Harris said government initiatives such as the New Markets Tax Credit Program, which was established in 2000 to help funnel investment dollars into low-income areas, have largely failed to aid black small-business owners.

“When you have a good-old-boy system that is designed to keep our businesses away from opportunity, then what can you expect?” he said.

“The top 10% in America own a combined 80-90% of the wealth, so everybody else is fighting over crumbs,” Harris said. “That’s a problem for everyone in the United States, not just black folks. We’re just at the bottom of the barrel.”

Before the coronavirus pandemic, Pam Smith, owner of Sadie’s Kitchen and Catering, was planning to expand her business with a sit-down restaurant.

Smith started offering pickup and delivery service to keep the doors open. As far as the restaurant goes, “best believe that’s not our goal any longer. The pandemic changed everything,” she said.

Smith said she was also fortunate enough to qualify for a forgivable federal loan to cover basic business expenses like payroll and utilities.

“That enabled us to pay our bills and keep going,” Smith said. “Because we weren’t stuck in any rental or mortgage contracts, we were able to reinvent ourselves with the help of that loan.”

John Pinnington moved to the United States nearly 25 years ago with a vision of owning his own business.

“That was my American dream,” said Pinnington, 52. “As a black man in England, I believed that I could go to any country and achieve whatever I wanted. America said to me: Come here, work hard, and you’ll be successful.”

That hard work included odd jobs as he slowly worked toward opening AA Printing Service at Maryland Parkway and Tropicana Avenue in 2010. It’s a full-service digital print shop with a half-dozen employees and a sister T-shirt printing company.

It’s a challenging time in America to be a business owner because of the economic uncertainty caused by the pandemic. For some Pinnington, says, there has always been other barriers to overcome because of the color of their skin.

“Coming from another country, I still believe I can do whatever I want, but I see in America that certain people keep you at a certain level,” he said. “You can’t go too high in some circles or someone will force you down. It’s about staying in your lane.”

Pinnington, who sits on the board of the Las Vegas Urban Chamber of Commerce, said he was able to secure a Paycheck Protection Program loan to keep his businesses going. He’s one of the fortunate ones.

He says some blacked-owned businesses haven’t properly kept their books and don’t have the documents required for assistance. “They will just continue to struggle to survive, like they’ve done all their lives,” he said.